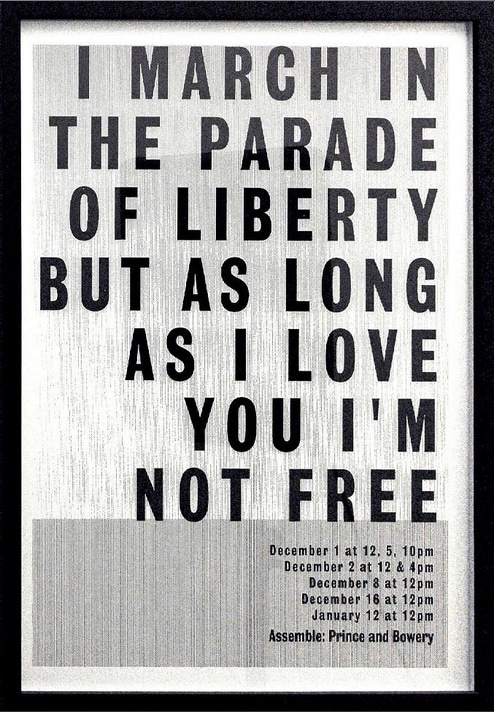 I march in the parade of liberty but as long as I love you Im not free, 2007.
50.8 x 60 cm..
Instalation consisted by a one chanel audio and silk screen on paper.

Born in Baltimore in 1970, Sharon Hayes studied anthropology at Bowdoin College in Brunswick, Maine, and performance art at Trinity/LaMama Performing Arts Program in New York in the early 1990s. She later pursued her studies at the Whitney Independent Study Program, New York, from 1999 to 2000, and received an MFA in interdisciplinary studies from the University of California Los Angeles in 2003. Hayes practices a unique blend of performance and social engagement, often taking her performances outside of the gallery and into the street. She is known for reciting, or, to use the term she prefers, “re-speaking” political speeches from the 1960s and 1970s. Hayes’s solo exhibitions or performances have taken place at such institutions as Art in General, New York, and the Room Gallery, University of California, Irvine (both 2005); New Museum for Contemporary Art, New York (2007); Warsaw Museum of Modern Art (2008); Kunstmuseum St. Gallen, St. Gallen, Switzerland; Göteborgs konsthall, Gothenburg, Sweden; Objectif Exhibitions, Antwerp; and Context Gallery, Derry, Northern Ireland (all 2009).