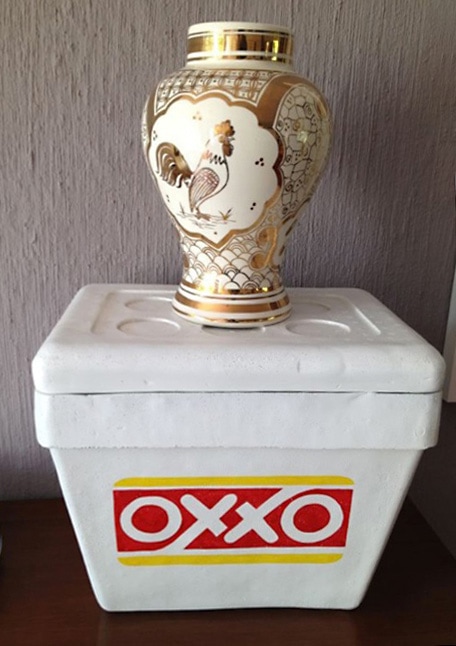 He received his degree in arts at Otis College of Art and Design in Los Angeles. His work has been exhibited in several solo exhibitions in places such as the Museum of Contemporary Art in Denver, Colorado; Tokyo Wonder Site, Tokyo, Japan; LA Louver Gallery in Los Angeles, California; 404 Contemporary Art in Naples, Italy, and the Museum of Art Santa Monica in Santa Monica, California, and many more venues. A constant theme in Eduardo Sarabia’s work has been his interest in the relationship between his cultural roots and his American identity. Drawing inspiration from the unique and complex zone that divides Mexico from the United States, Sarabia stages intricate scenes infused with light romanticism, humor, and a sense of absurdity. From his liminal point of view, Sarabia exposes clichés about Mexican culture in order to question the imaginary borders demarcated by cultural stereotypes. Sarabia’s work has also been included in several group shows, like New Blue and White in the Museum of Fine Arts, Boston, Massachusetts (2013); Turn Off the Sun: Selections from La Colección Jumex Foundation at the Museum of the University of Arizona in Tempe, Arizona (2013); Basic forces, drawing on recent forms of Jalisco at the Museum of Mexico City, Federal District (2011); An Expanded Possibilities in the Field of Contemporary Arts Forum Santa Barbara (2009); and Phantom Sightings: Art After The Chicano Movement in the Art Museum of Los Angeles County, among many others. In 2008 Sarabia’s work was included in the Whitney Biennial at the Whitney Museum of American Art in New York. The recognized work Sarabia, Living German, has been featured in several museums and exhibitions around the world. He has also produced several public projects and interventions in venues such as the New York Museum in New York, NY; Public Art, Art Basel Miami Beach in Miami, Florida, and united nations plaza in Berlin, Germany. Sarabia’s work has been included in various public and private collections around the world.